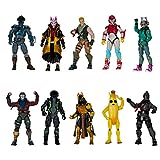 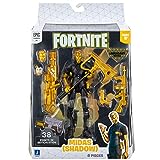 Fortnite is a Battle Royale game that is free to play. The aim of the game is to be the last one standing out of 100 players. When you first log in to the game you get a random variation on the default Fortnite skin. If you have enough vbucks you can buy different skins, but what is the rarest skin Fortnite?

The rarity order of skins

Before you even think about how to get rare skins in Fortnite, it is important to understand the order of rarity. There are several different categories that Fortnite skins fit into. The category dictates the rarity of each particular Fortnite skin.

What are the Rarest Skins Fortnite Has To Offer?

This skin is a season 1 skin. This skin is classed as rare so it is not legendary and it was only obtainable by reaching level 15 in Season 1. Because you could only obtain it in season 1, it is now considered rare. If you don’t currently have this skin, you probably never will get it.

There is also a female version of this Fortnite skin called the Recon Expert. This skin is very similar, but is specifically for a female player. The female skin is also rare and is actually in the top 14 Fortnite Rare Skins category.

This skin is a Halloween skin. The reason that it is so high up on the Fortnite rare items list is because it was last seen in the Fortnite item shop 551 days ago. The skin was originally released for a Halloween event in November 2017. This rare Fortnite skin was available to purchase in season 1.

This is considered to be one of Fortnite’s Rare skins because it’s no longer possible to purchase the Ghoul Trooper skin. That means if you don’t currently have this skin in your inventory, you probably won’t ever have it.

The Reaper: Not to be confused with John Wick

This skin was based off of John Wick, a fictional secret agent character. However, there was also a skin created specifically for John Wick, which came out at roughly the same time as the film John Wick 3. There was also a game mode for that skin, called Wick’s Bounty. Because of these two skins both being dedicated to John Wick, some people get the two skins confused.

The Reaper was obtainable at Tier 100 in the Season 3 Battle Pass.

The Reaper Fortnite skin has a status of Legendary. This means it is worth a lot since it is not obtainable any longer. Anyone who has the Reaper skin should consider themselves very lucky and this skin would make their Fortnite account very valuable.

Marvel's Guardians of the Galaxy - Xbox...
$29.99
Buy on Amazon
SaleFeatured

Hang Time skins, one of the Fortnite rare skins bundles, were brought into the item shop because a player made an LTM (A Fortnite game mode) called Downtown Drop for the LTM Creator Contest, and they won.

These two hang time skins come with challenges for unlock-able styles. So you can get different color variants. The game mode that came with these skins; Downtown Drop, is a game mode where you slide around places and collect coins. If you collect the most coins, you win. There are challenges for this game mode and if you complete the challenges, which involve things such as dancing at the basketball court, you would get a skateboard back bling. For every challenge that you complete, there is a different style.

The Hang Time bundle is rare because this LTM is only available for a limited time. Once the LTM is gone, the skins are as well.

The reason this skin has an unknown rarity is because it is a Fortnite mod, AKA a hack. Fortnite hacks change the game, for example Aimbot which is basically a hacking program for Fortnite which makes player skins red or green to show how far away they are.

Similarly, the Spiderman skin is not Aimbot, but it is a hack. Hacks such as the Spiderman skin are a big red light for Epic. In other words, you shouldn’t be using them because it makes the game unfair. For example, some people use killing hacks to kill everyone on the server, which is unfair for all of the other players.

Even though the Spiderman Fortnite skin shouldn’t be used according to Epic, it is still a very rare skin and as such many people wish they could have it.

Speaking of Fortnite hacks, someone used hacks during the Fortnite work cup and was disqualified but afterwards they were let back in – something that seems very unfair.

How To Get Rare Skins In Fortnite

It is possible to get some rare Fortnite skins. For example, it is possible to get the Hang Time skins but you have to be quick. If you want to get the Fortnite Hangtime bundle then you just have to obtain it before it ends – 2 days at the time of writing. Whilst it is still available you can simply buy it in the item shop but beware, once it is gone it probably won’t be back for a while, if ever.

Some skins, such as the Ghoul Trooper might come back periodically – for example this skin might come back in Halloween 2019. This means that whilst these skins are very rare, it is sometimes possible to obtain them, you just have to keep on the lookout.

What Are The Rarest Skins In Fortnite And How Can I Obtain Them?

Other skins such as the Reaper will never come back so these skins are far harder to obtain if you don’t already have them. For that reason, the Reaper could legitimately be classed as the most rare skin in Fortnite.

The only way that you could obtain one of the rarest skins Fortnite Battle Royale has to offer, would be to buy someone else’s Fortnite account who already has the skin that you desire. You can buy these Fortnite accounts from marketplaces such as eBay. However, buying Fortnite accounts is against the terms and conditions of Epic and is a risky business. There is always a risk that you buy an account from someone and they don’t actually deliver the account to you.

There used to be a feature called account merging which allowed you to put two accounts together – so for example, if you bought an account with the skins that you needed, then you could merge that account with your own account. However, this is no longer an option in Fortnite. So now, if you bought an account, you would have to use that as your main Fortnite account.

This article was co-written and researched by Charlotte Silvester (AKA Charlotte Fudge).