For me, Mario Kart is one of those fun-filled games that will always bring back childhood memories of late-night racing with friends.  As a 20-year Mario Kart enthusiast, it’s safe to say that I’ve spent thousands of hours across all 9 Mario Kart titles (and I HAVE!).

As a dedicated fan, I was excited to put together this guide to help fans alike choose their next Mario Kart game to compete in; and here it is!

Mario Kart; first released by Nintendo in 1992, is Nintendo’s most iconic HIT release and has since become a staple in the gaming community as a Classic.

Mario Kart was an instant success that captivated the hearts of millions of gamers worldwide.

From Super Mario Kart to Mario Kart 8 Deluxe, and all other 7 Mario Kart releases in between, I’ve played them “all” and have racked up countless hours of in-game play time.

As an adult that started playing Mario Kart at the age of 5 you could consider me to be a Mario Kart veteran and I’ve narrowed down my list of the best Mario Kart game to play to a “Top 3” conclusion. 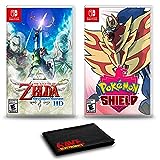 This enthusiast guide will outline each of the Mario Kart titles along with reviews on my personal Top-3 releases in the MK lineup.

Mario Kart is a fun-filled, action-driven game that always provides endless hours of excitement (especially when playing with friends!).  We’re excited to review these titles and hope we’re able to help you choose your next Mario Kart game so you too can enjoy the countless hours of fun that await.

There are a total of 9 Mario Kart titles, including:

The best Mario Kart game by far (in my opinion) is Nintendo’s latest release of Mario Kart 8 Deluxe.  In MK 8 Deluxe, Nintendo has combined playing elements from previous games before it and has perfected the playing style and in-game mechanics to provide an awesome Mario Karting experience.

Before diving into the review I’d like to speak on the games incredible playability and performance.

With a 150 CC cart, the SPEED brings a thrilling experience unlike one I’ve ever experienced in a previous MK title.  Controlling and steering the car is ultra-smooth, drifting is incredibly concise, and the newly added “zero-gravity” zones add more challenges and speed for players.

Also, I really appreciate the fact that Nintendo implemented the new Smart-Steering feature alongside auto-acceleration as this makes the game easier to play; especially for Mario Kart newcomers that want to jump into the action without having to become acclimated to controls.

Another great addition to MK 8 Deluxe is the “glider” sections (brought over from MK 7) where players can hang-glide from various drop-off points of the tracks.  Combined with incredible visuals and jaw-dropping attention to detail, I’m pretty sure you’ll love this release just as much as I’ve enjoyed it.

Between the underwater map locations and glider feature, the tracks have an ever-evolving racing environment similar to that of MK7.  One of the coolest new additions in MK 8 Deluxe are the anti-gravity segments of the tracks which makes the game that much more fun and challenging.

From Hang-gliding to Waterfall Races; MK 8 Deluxe is Action-Packed

Hang-gliding from the side of an ice-capped cave on Mount Wario, racing up the falls on Shy Guy Falls, or racing upside down on the Mario Circuit course really makes you want to take a pause to appreciate the work that went into these courses.

Shine Thief and Bob-omb Blast are a couple of returning game modes and the all-new Renegade mode (a spinoff of “Cops and Robbers”) really makes this Mario Kart release one of the best yet.

Plus, similar to how MK Double Dash’s two-driver mode changed the game; MK 8 Deluxe’s 200 CC mode will force even the most experienced MK players to re-strategize their racing approach.

In the end, the best Mario Kart game is the one with the best map selections and designs as this is what helps to provide an immersive experience.  MK 8 Deluxe by far features the best tracks in the entire series; each and every one has distinctive design elements and stellar visuals.

The new concepts and game elements introduced to Mario Kart in MK Wii were some of the most needed since Double-Dash.

The optional motion-assist controls made playability user-friendly for all players as well; even for those that haven’t had their hands on a gaming controller in years.

An Immersive Experience – Race with a Steering Wheel!

I can’t deny the fact either that the Wii steering wheel accessory is a BLAST to use – it really makes for an immersive Mario Kart experience and puts you in the center of the action as you drift corners and blast your competitors away with special power-ups.

In this release players also received a new vehicle type; Bikes.  Some of these include the Dolphin Dasher, Spear, and the Dolphin Dasher (just to name a few).  This new addition requires players to adjust their racing strategies as they race on a bike capable of popping wheelies and performing tricks (over ridges).

This Mario Kart release also features 12-player multiplayer compared to 8 in previous releases.  This makes the game more fun for newcomers as their chances of placing in last is less likely.  Nintendo also listened to fan requests for Automatic drifting so non-frequent gamers will find it easier to maneuver the tracks during races.

It’s also well worth mentioning that of the 32 tracks available to race on there are some incredible maps to choose from.

Some of the best tracks in Mario Kart Wii include:

At the time, Nintendo had also revamped its online services to provide more stable gameplay for multiplayer connections which further improved the playability of Mario Kart Wii – one of the reasons I chose it as one of the best Mario Kart games yet!

Mario Kart Double Dash will always be a special release that I hold near and dear to me.  I remember when Double Dash first came out on GameCube; I and my little brother would stay up all night battling it out on some epic tracks that supported a 2-character per cart gameplay option.

Seriously, there was nothing more fun than challenging a few friends in a racing duel in a 2v2 race; it was a BLAST!  The Mario Kart experience was entirely different when playing with a kart-mate that served as both your worst enemy and trusted ally compared to a single-player or free-for-all mode.

I will say though that the FFA game mode was a lot of fun in this release – it’s always thrilling to play an FFA race and getting to pick that one specific character you want to play with before anyone else does.

Double Dash features 16 beautifully designed tracks some of which including DK Mountain, Luigi’s Circuit, and also Baby Park (a VERY FUN track to race on).

Shine Thief is also a new battle mode that was first introduced in Double Dash.  In this game mode, players are challenged to keep a Shine Sprite in their possession until the time clock depletes.  Unlike Balloon Battle (which is mainly focused on offensive play), in Shine Thief, players are required to have evasion and defense skills.

This game mode was so popular that it ended up being added to Mario Kart 8 Delux’s game mode lineup.

A Guide for How to Download Super Mario Brothers on PC